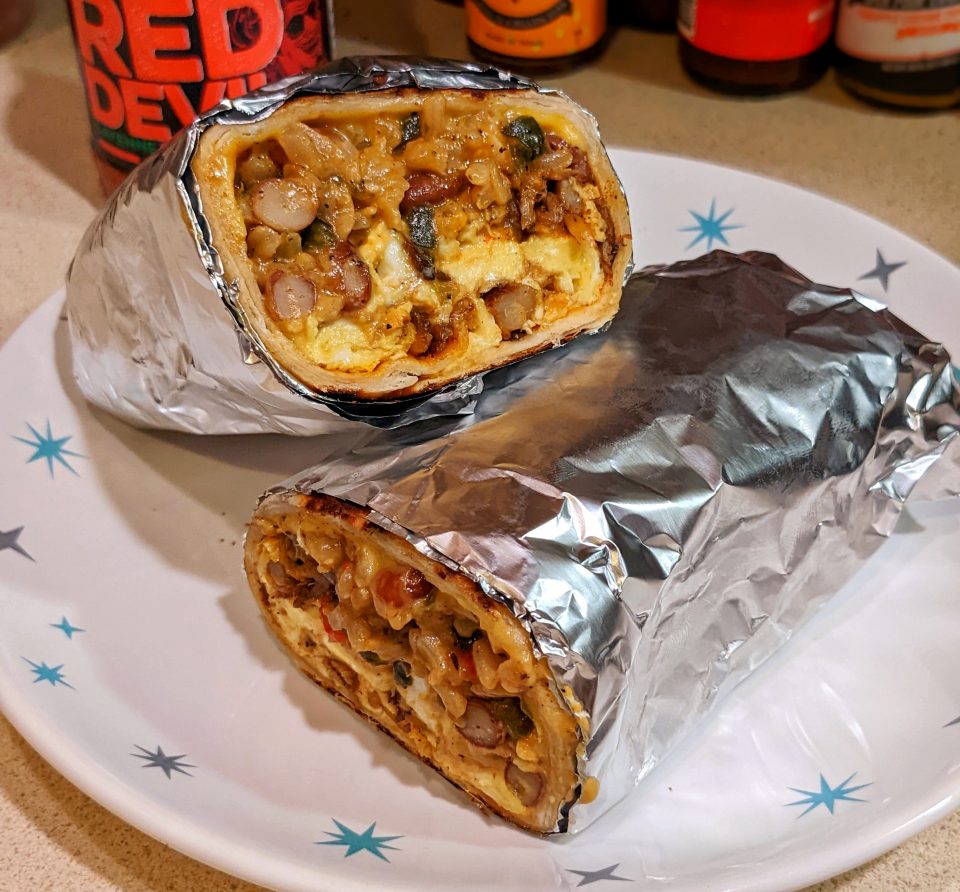 “Around Louisiana way, where lived the Cajun Lady aboard the Mississippi Queen”

A lot of fuss has been made about the cowbell in “Don’t Fear The Reaper” thanks to SNL, but, for my money, the truly legendary & epic Rock Cowbell moment comes in the form of Mountain & Leslie West’s opening to “Mississippi Queen.” I’m not much of a Mountain fan, but this is a monster of a rock song. West is too often overlooked as a rock guitarist and Mountain never achieved the sort of fame of their other Southern Rock brethren, but the theme here proves they are worthy of Rock Godhood if only for that massive riff. What I find interesting about “Southern Rock” is its ability to fuse country, blues, and hard rock into something new and perhaps slightly better than the sum of its parts

Which is a dovetail into this Adventure In Leftovers. This answers the question: “What happens when you combine Cajun rice, blackened mushrooms, cheese, & scrambled eggs into a burrito?” The result is a monster of a burrito that’s more lunch than breakfast and definitely fit for a Cajun Lady on the Mississippi Queen.

Clean the mushrooms and cut off the bottom stems. Separate into bite-sized pieces and place in a medium bowl. Toss with 1 tablespoon olive oil and Hot Blooded seasoning until thoroughly coated. Set aside on the counter for 30 minutes.

Heat 1 tablespoon of oil in a medium skillet. Add the marinated mushrooms and cook until crispy about 6-7 minutes. Remove them from the skillet and return to the bowl you used to marinate them.

Lightly warm the tortillas and place them on a cutting board overlapping to make one large tortilla. Place three slices of cheese in the middle of the overlapping tortillas. Heat 1 tablespoon of olive oil in the skillet. Add the Kinda Dirty Rice and cook until hot and a little crispy. Spoon the rice evenly over the cheese. Top with the remaining three slices of cheese.

Scramble the eggs in a small bowl. Add the remaining olive oil to the skillet and scramble the eggs. When done, spoon the eggs evenly over the cheese layer in the burrito. Top the eggs with the fried mushrooms and some hot sauce. Now, carefully roll the burrito starting by folding in the sides then tucking the filling in as you roll. Place the rolled burrito, seam side down, in the skillet to toast. Once the seam is sealed and golden, flip and toast the top. Finally, roll the toasted burrito in foil and let it rest for 10 minutes before cutting it in half.