We Are The Champignons 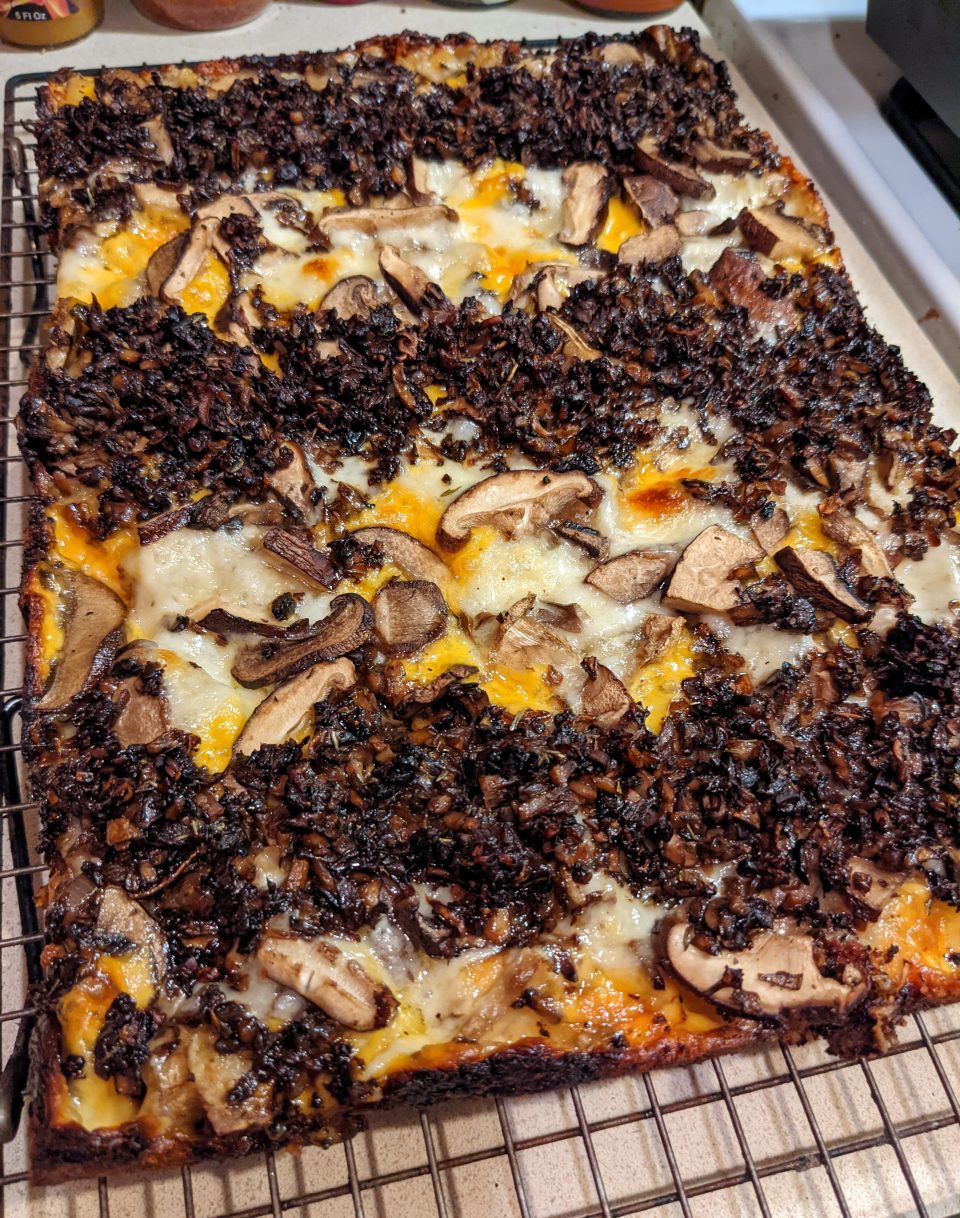 “No time for losers ’cause we are the champions of the world.”

This is the third Queen entry in the Music & Food project and, to be honest, perhaps one of my least favorite Queen songs. As I’ve stated previously, I am a deep-cut Queen fan. I’ve never really dug their hits. It says a lot that I often find the Roger Taylor tracks the most interesting. On News Of The World, those tracks are “Fight From The Inside” and the 1974 leftover “Sheer Heart Attack.” I can tolerate “We Will Rock You” as a sports ball anthem, and the theme song here isn’t horrible. The rest of this album marks Queen’s descent into arena-rock drek. This was the second to last Queen album I bought and should’ve been the last. I mean, “Fat Bottom Girls?!?” REALLY, Freddie!?!

I give credit to Cherie (of We Can Tour That fame) for this pun and theme song inspiration. Once I discovered the brilliance of the King Arthur Baking Detroit Pizza dough recipe, I became obsessed with bi-weekly pizza parties. As I cook around 95% plant-based, that meant exploring a variety of vegetarian pizzas and pizzas topped with chickwheat or seitan. Ultimately, that led to a mushroom pizza which led to this Serious Eats pizza which led to this recipe. I really loved the idea of swapping a tomato sauce for a duxelles, and when applied to the Detroit-style it makes for a stunning presentation. I went horizontal with the stripes of duxelles, but feel free to create your own pattern.

WE ARE THE CHAMPIGNONS
Detroit-style mushroom pizza
Makes 1 pizza

Begin by making a batch of pizza dough according to the King Arther Baking recipe.

When you reach the point where the dough has risen and you’re stretching it in the pan, start prepping your mushrooms.

Place a large plate in the freezer. Place half mushrooms in the bowl of a food processor and pulse until very finely chopped, about 10 short pulses, scraping down sides and redistributing mushrooms with a spatula as necessary. (Or, dice very finely with a knife if that’s your thing.) Transfer to a bowl. Thinly slice the remaining mushrooms and set aside until assembling pizzas.

Heat 2 tablespoons olive oil in a 12-inch skillet over medium-high heat until shimmering. Add chopped mushrooms and cook, stirring occasionally, until mushrooms have exuded all their liquid and start to sizzle, about 8 minutes. Continue cooking until mushrooms begin to brown and leave browned bits stuck to the bottom of the pan, about 4 minutes longer. Add shallot and thyme and cook, stirring frequently, until softened, about 2 minutes.

Add black vinegar or balsamic. Scrape bottom of skillet with a silicone spatula or wooden spoon to release browned bits. Continue to cook until the vinegar is nearly dry. Add soy sauce and stir to combine. Season to taste with salt and pepper and transfer mixture to the chilled plate. Spread into a thin, even layer and let cool to room temperature.

When the dough has finished the second rise, it’s time to assemble. Start by spreading the cubed cheese across the dough making sure to spread them to the edge of the pan. Top the cheese with the sliced mushrooms. Gently spoon the sauteed mushrooms in three stripes across the pizza. Feel free to be creative with the design.

Transfer the pizza to the bottom rack of the oven, and bake until the cheese is bubbly and the edges have turned nearly black for about 12 to 15 minutes.

Remove the pizza from the oven, run a spatula around the edges to loosen it from the pan, and let it rest for 10 minutes, or until you can handle it. Transfer the pizza to a cutting board, cut, and serve.