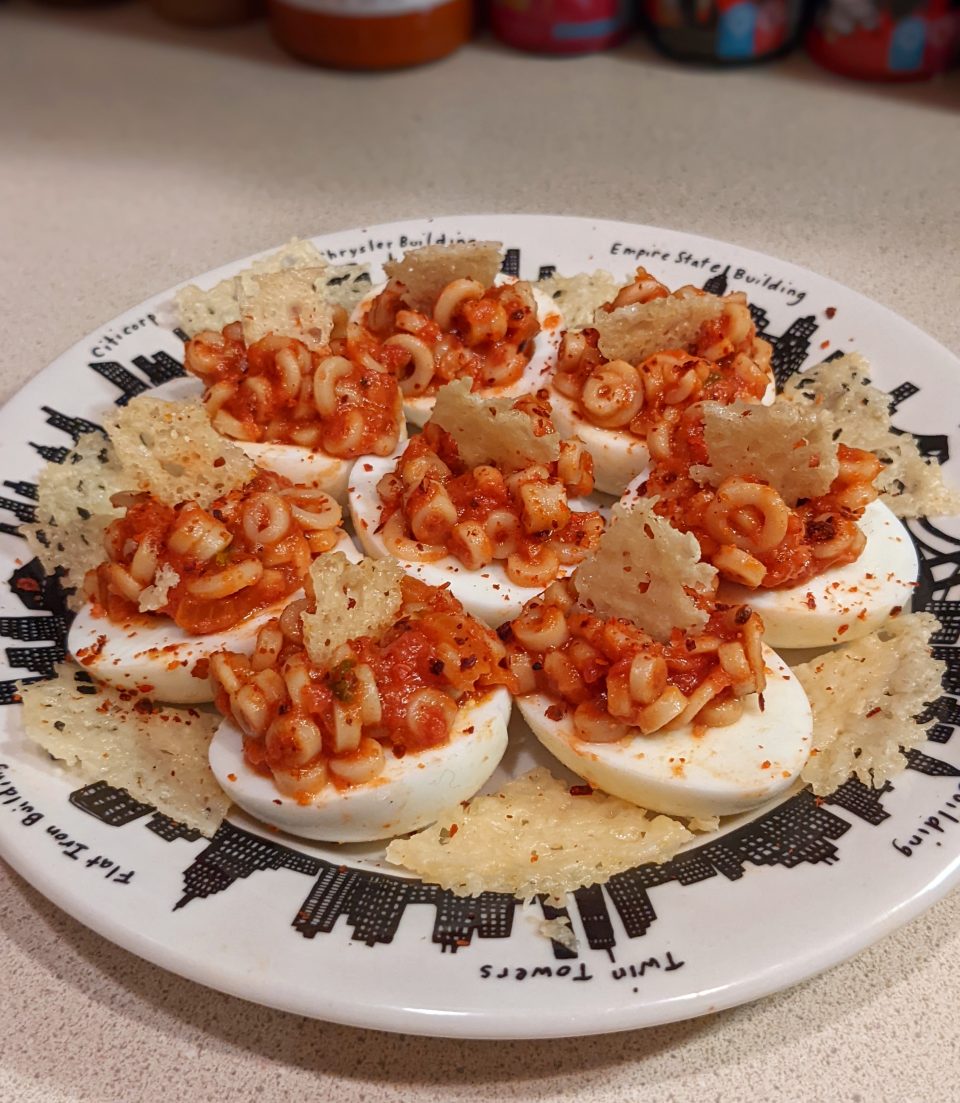 “My tummy’s turnin’ and I’m feelin’ kinda homesick. Too much pressure and I’m nervous.”

Theme song by Miley Cyrus “Party In The U.S.A.” from The Time Of Our Lives
Listen on Spotify
Listen on YouTube

I initially dismissed Miley Cyrus mostly due to her dad being Billy Ray. Plus, I was far more Nickelodeon than Disney Channel back in the day. As Miley’s career has progressed, however, I have come to realize (much like Lady Gaga) I misjudged her. Her work with Flaming Lips was pretty genius. A lot of her recent music has proven her songwriting chops. She certainly knows how to put on a show – sometimes to excess but always interesting. Sure, she’s got a ton of fluffy pop candy records like the theme song here, but even those are damn addicting earworm gems. You know you’re going to be looping “Nodding my head like — yeah” in your head for days after a single play of this track.

Sadly, the same can be said about the memories of eating this nightmare appetizer. There’s no need to concern yourself with WHY I originally made this (hint: the interwebs). You need to focus on WHY you would want to make it. You already cannot unsee it. Do you really want to live in a world where you can’t untaste it? That’s the world I now live in, and while it turns out to not be as bad as expected, it’s still not something I need to ever experience again.

PARTY IN THE U.S.EGG.
Spaghetti-O filled deviled eggs with parmesan crisps
Makes as many as you want or tolerate

Some Spaghetti-Os (or buy a can if you don’t want the effort of homemade)
Some hard-boiled egg whites
1/2 cup parmesan, shredded

Hard-boil some eggs. The number is up to you. It depends on how committed you are to this culinary monstrosity. Remember, each egg creates two egg whites for filling.

Line a baking sheet with parchment paper or a Silpat. Preheat the oven to 400°F. Pour a heaping tablespoon of parmesan onto the baking sheet and lightly pat down. Repeat with the remaining cheese, spacing the spoonfuls about 1/2 inch apart. Bake for 3 to 5 minutes or until golden and crisp. Cool. Set aside.

Peel your eggs and slice them in half lengthwise. Carefully scoop out the yolks and set them aside. You can use the yolks for an egg salad or mix them into the spaghetti-os to elevate this to a culinary atrocity.

Reheat the spaghetti-os or don’t. If you’ve gotten this far in making this abomination whether the filling is hot or cold is the least of your problems. Spoon the spaghetti-os into the egg whites. Break off pieces of the parmesan crisps and place them as a garnish on the eggs.

Now, question what exactly happened in your life to lead you to this moment.